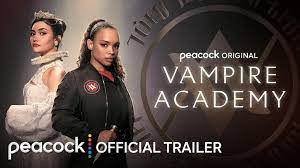 The series remake will be arriving years after the 2014 film of the same name. The film starred Zoey and Lucy Fry. Peacock’s Vampire Academy will change the narrative of human and vampire relations. The official description of the series is as follows:

“Two young women’s friendship transcends their strikingly different classes as they prepare to complete their education and enter vampire society.” The series stars Daniela Nieves as Lissa and her protector/bestie Rose who is portrayed by Sisi Stringer.

What To Look Forward To In Vampire Academy? 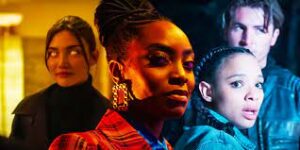 Fans of author Richelle Mead’s works will be coming to your TV screens on Thursday, September 15th. The writers, showrunners & executive producers Julie Plec (The Vampire Diaries, The Originals, Legacies) and Marguerite MacIntyre (The Originals, Legacies), revealed some new details about the upcoming series.

The most -anticipated Vampire Academy is all set to hit Peacock. It will not be a one-episode premiere and the viewers can look forward to the first four episodes dropping on Peacock. The makers have revealed a ton of preview images for the show. According to the latest buzz, the show will be releasing 4 new episodes of the show altogether.

Is There A Trailer For Vampire Academy?

An official trailer of Vampire Academy is out. Plec & MacIntyre passed along a note to fans about the project along with the trailer. You can find out more about the series in the trailer.

What is The Plot Of Vampire Academy?

The fans have loved Richelle Mead’s wholly original book series since it came out 15 years ago. It is a brilliant exploration of an unbalanced class-based society. It tells the story of the pampered Royals on one end.

The show is about a Guardian class whose sole purpose is to protect them from the other. There is an ugly dynastic change on the horizon, and the world teetering on the edge is seen in the show. The show is all set in an enclave that the humans are unaware of. It is a unique world where all too recognizable.

The show is shot in a castle in Spain which is filled with grandeur and palace intrigue. You can also expect to watch exciting fight sequences and romance. It is a heartwarming story and tells the story of the revolutionary power of friendship. We can expect to see a lot of particularly female friendships.

Vampire Academy tells the story of the extraordinary Rose Hathaway and Lissa Dragomir. The two young women are on the brink of inheriting a world order that they have never questioned. They realize even their own friendship is not immune to the cruel nature of the system.

Who is In The Cast And Crew Of Vampire Academy? 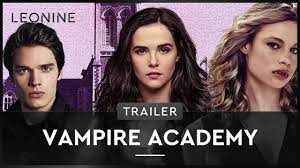 It is produced by Universal Television (a division of Universal Studio Group). The other cast members include Kieron Moore as Dmitri, Andre Dae Kim as Christian, J. August Richards as Victor, Alex Hafner as James, Mia Mckenna-Bruce as Mia, Jennifer Kirby as Alberta, and Javier Ramos as Dean.

Where can I watch Vampire Academy 2022?

How many episodes are there in Vampire Academy?

Vampire Academy is all set for a 4-Episode Premiere. It will have a total of 10 episodes. Peacock has described the series as a “sexy drama which combines the elegance of aristocratic romance. You can also experience some supernatural thrills of the vampire genre.” The show will release 10 one-hour episodes.

“It’s got everything: The Bridgerton and The Hunger Games.”

“We took all the incredible inspiration from Richelle Mead’s books — all her rules, her mythology, her characters — and we folded that into this vampire dominion that we built from scratch,” Julie explained. “I’ve never done a world build that intricate before. It was a million times harder than anything I’ve done.”

Julie explained more about the vampire hierarchy in the show, stating, “Vampire Academy is all about the different species of vampires. There are royal, posh, cloth-napkin vampires, and then the Strigoi, who are closer to what you might expect a rabid feral vampire from the original days would behave like. They’re lurking in the shadows, so there’s very much a genre tone when it comes to the Strigoi. There’s some great horror eye candy in this show as well.”