Nick Wayne was all set to perform in United Kingdom and entertain his fans. This trip was set to be a trip that he will never forget. The 17-year old prodigy didn’t know what he was getting into. Unfortunately a serious accident accrued on his flight back home. It is going to be a threatening experience that he will never forget. Nick and his mother were reportedly suspected in a potential bomb threat. They were taking a flight back to the USA and it seemed everything went out of control. The flight took off from Frankfurt Germany to Seattle Washington. Here are more details to this story: 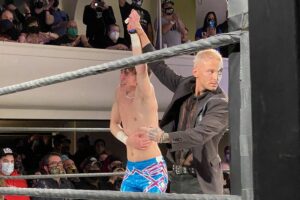 Nick and his mother took a flight from Germany to Washington. Everything went out of control as a bomb threat was written the bathroom mirror. Due to this a decision of diverting the plane was taken immediately. The flight suddenly stopped at Keflavik, Iceland and entire passengers were detained. Even the luggage and other personal belongings were searched thoroughly. All the local authorities performed their best to detect any threatening materials.

According to a report Nick’s mother was interrogated for ‘quite some time’. It was due to the makeup she had in her belongings. They authorities thought that this item could have been used to write the threatening message on the mirror. His mother was in panic all this while as the investigation was longer than expected. She was scared that she may get detained even though she hasn’t done anything.

Bryan Alvarez who is a spokesperson for Wrestling Observer Radio revealed the following detail:

“Somebody apparently went into the bathroom and wrote either ‘bomb’ or ‘explosion’ on the mirror in the bathroom. They turned around, they landed in Iceland, they took everybody off the plane, and they herded them into some secure area.” Local police in Iceland conducted a search of all carry-on items and passenger belongings.

“Apparently [Nick’s] mother was interrogated for quite a while because she had an eyeliner or something of that nature and obviously [the threat] had been scrawled in eyeliner or makeup on the bathroom mirror. So, she was in a panic’’. “They’re not allowed to do anything including charge their phones so everybody’s phone is about to die. So, I don’t know when we’ll get an update until presumably, they are home’’. 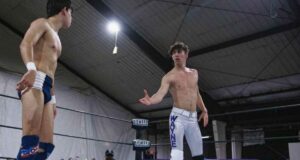 Condor was the operator of the airplane as it was passing over Greenland. The plane was flying above 36,000 feet according to a report from Flight Radar 24. As a threat was detected the plane was stopped in another location. However, during this time passengers were allowed to use washroom. They were not allowed to charge any of their mobile phones instead. A new craft was send for the passengers to grab the next flight to their desired locations.

It is not clear whether the passengers are detained and questioned as of now or not. Maybe they have been sent on the new plane already. If we talk about the new tweet from Nick himself, the situation seemed to have improved already. Nick was in United Kingdom to perform at Progress Wrestling. In this match he defeated Robbie C.

As it was a one-on-one match it was challenging to handle everything. The 17 year old wrestling star is still new to this profession. He signed up for All Elite Wrestling at the start of this year. Similarly he will be in action this week during Starrcast in Nashville, TN. He will be taking on Alex Zayne at GCW: The People vs. GCW this Friday night. According to a new report a total 226 people are sent to a special area that is guarded by the police itself. It remains to be clear who is detained in this process. If you want more updates, keep checking this space!