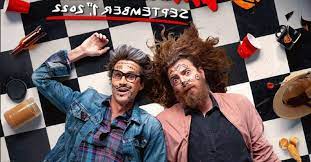 It will be a variety entertainment show and will have something for every age group. The show will be based on Rhett & Link’s super popular daily show Good Mythical Morning. It looks like this version of the show will draw an even bigger crowd in 2022. Let’s find out more about it.

Return Of Good Mythical Evening Will Set A Bigger Stage 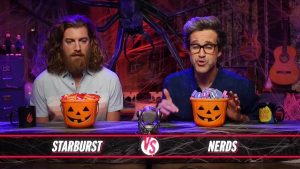 Mythical Evening will set a higher standard this time. It will be a large-scale Livestream event and this is why the fans of the show are even more excited about it. Mythical and Rhett & Link will be partnering up with the premium social live media platform Moment House and will be producing the expanded version this year. The show made its debut in 2021 and it sold over 70,000+ tickets.

Good Mythical Evening: What Will It Be About?

Good Mythical Evening will offer Rhett & Link fans a decidedly R-rated spin on the top-rated show Good Mythical Morning. It will be based on a variety of show formats. The show will be featuring cursing, drinking, and adult situations galore and will be targeted toward the mature audience.

Good Mythical Evening will release on September 1, 2022. The show will stream at 7:00 pm PDT. All the Mythical Society members – Rhett & Link’s subscription service will launch early pre-sale access. The fans will get access to the live stream show on Wednesday, July 13 at 3:00 am PDT. The general sales for the public will begin on Friday, July 15 at 3:00 am PDT. The pre-sale of the show will start on Wednesday (7/13) for all the Society members. If you are looking for the tickets then they will be on sale Friday (7/15).

Tickets for the Good Mythical Evening price will be starting at $21.99. The show can be purchased at the official website of the show: goodmythicalevening.com.

Good Mythical Evening bundles will allow the fans to automatically enter into a MythiCon VIP ticket giveaway. One winner will be chosen for an all-inclusive free flight, hotel reservation, and transportation fee. The Super-Mega-Beast MythiCon experience will be a treat for the fans. There will also be another winner who will get an all-inclusive Mega-Beast Mythicon experience as well.

Mythical Evening: Who Is The Creator Of The Show? 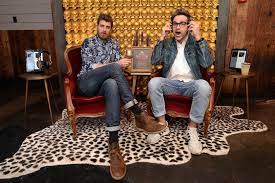 Mythical is the first Internet-first entertainment studio that is led by YouTube creators Rhett & Link. The company’s owned/operated YouTube channels have around 76 million subscribers and more than 27 billion lifetime views. The show has a lot of followers on Instagram, Facebook, Twitch, Snap, and TikTok. The Twitter account has exceeded more than 52 million.

Rhett & Link are the hosts of the Internet’s most popular daily show. The show will now be in its 10th year, and enjoys a wide range of viewership comparable, and is competing with the largest TV talk shows.

In 2020 Mythical broadened its portfolio and launched the culinary content brand Mythical Kitchen. They also led their core video business and ancillaries and have launched several products like podcasting, DTC apparel, and grooming products, live touring book publishing, branded content, and much more.

Where Can You Watch Good Mythical Morning?

You can watch the previous season of Good Mythical Morning on Prime Video. The current season of the show will be on pre-sale soon.

Mythical Society members which is a Rhett & Link subscription service can get early pre-sale access to the show. The show will be returning and will be available for all the subscribers on Wednesday, July 13 at 3:00 am PDT.

The fans who are not a subscriber of the Mythical society can get the chance to book for the show when the general sales start. The general sales will be available to the public on Friday, July 15 at 3:00 am PDT.