There are lot of updates coming up regarding the AEW locker room and CM Punk. According to a latest report, AEW talents aren’t happy with many things. They feel they aren’t informed about anything official. Some reports suggest that CM Punk may exit from the company. Similarly he may make some ‘major amends’ to remain with AEW.

Contents show
1 Tension Escalation at All out pay per view
2 How WWE Feels About CM Punk’s Comments On Scrum?

Sapp reported that all the heat coming up on CM is ‘unreal’. Some tension is building up after the Sunday’s ‘All out pay per view’. During the post show by media CM has used some harsh words against other talent. Here is more to this story:

Tension Escalation at All out pay per view 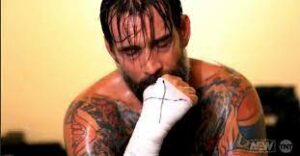 According to the latest updates a lot of tension is building up around ‘all out pay per view’. Post this show CM has used harsh words against many fellow wrestlers. It includes Colt Cabana, “Hangman” Adam Page, The Young Bucks, Kenny Omega, and others. Moreover CM got into a backstage fight with Omega and even the Bucks. CM has a long term friendship with trainer Ace Steel. Moreover he was involved with in a fight as well.

Earlier at the same night CM got to defeat Jon Moxley. He became a two time AEW world Champion very soon. However, he was sidelined from his title due to a foot injury. CM revealed about his injury on June 3rd episode of ‘Rampage’. This happened nearly five nights after winning the world title. He got this title from Page especially at the ‘Double or Nothing pay-per-view’

After the announcement of CM’s injury AEW got the chance to crown Moxley as the Interim AEW World Champion. It happened at NJPW x AEW Forbidden Door at the event that happened on June 26. Moxley got the chance to win this title by defeating New Japan Pro-Wrestling star Hiroshi Tanahashi. If this isn’t enough returned to AEW programming on the new edition of Dynamite. It happened on August 10th, 2022. However, after a title unification match he did it in over three minutes only.

How WWE Feels About CM Punk’s Comments On Scrum? 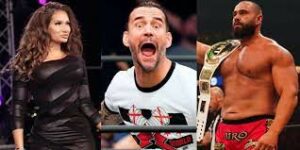 There is no doubt that a lot of rumors are coming up after AEW ‘All Out Pay per View’ that happened on Sunday Night. At the post show media scrum CM punk got into a verbal spat against former friend Colt Cabana. Moreover the newly-crowned AEW World Champion CM Punk went on to target Kenny Omega and Young Bucks. If this isn’t enough this continued with some harsh comments on “Hangman” Adam Page.

Numerous talent have reached out to give their views on this situation. According to them “the CM Punk that they knew years ago is being highlighted.” Some other wrestling talents have also expressed their unhappiness over these comments. The pair called into some other questions regarding AEW chief Tony Khan. They asked why he didn’t follow with some comments right after CM was criticizing one and all.

Meanwhile, another WWE talent feels that CM “is trying to run things, and it looks as though he’s doing it,” with another longtime WWE performer said they felt Punk was “unprofessional’’. They even called him “selfish and arrogant.” These sentiments are shared with other colleagues who have worked out with CM in the sets of Fox Program ‘WWE Backstage’.