The audience loves watching pirates and this is why different entertainment mediums have made content about it.  The shows with pirates have distinct characters that include good ones and evil ones.

It is time to meet some real-life pirates because the fans can look forward to the Netflix Original The Lost Pirate Kingdom.  It is a full-fledged documentary series and tells the story of the real-life pirates of the Caribbean. The documentary consists of a total of six episodes, it and will be based on facts and true stories.

The Lost Pirate Kingdom has released on the 15th of March 2021. The docu-series is available on Netflix around the world. The series consists of a total of six episodes and has launched its very first season. We can expect more seasons after season one airs. The series will focus on one story in every episode and will feature the golden age of Pirates.

The Plot of The Lost Pirate Kingdom 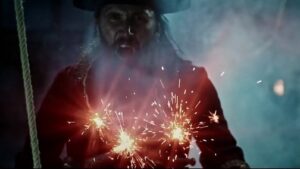 The official synopsis of Netflix for The Lost Pirate Kingdom has been revealed. The docu-series tells stories of real-life pirates of the Caribbean. The Pirates stole from the riches and have formed the egalitarian republic by becoming wealthy.  The all-new Netflix Original docu-series will tell the historical tale that is set in the era of the 12-year war between England and Spain.

The series is about the stories of British Privateers who were workers of the freelance Naval force. They came out in the open when war with Spain broke. They started stealing and robbing and retrieved their treasure from the Spanish. The British Privateers left the place and formed their own world’s first fully democratic republic that was formed in the Bahamas.

The Cast Of The Lost Pirate Kingdom

The main cast of the Netflix Original Docu-series The Lost Kingdom is about pivotal pirate figures. The docuseries will focus on the legendary Blackbeard. It is played by James Oliver Wheatley. The cast of the show includes Tom Padley and he plays Charles vane. Miles Yekinni plays Black Caesar. The cast includes actors like: