The plot revolving around Treasure hunts have always been appreciated by the audience. There have been several movies made on this topic and these movies, TV shows, and video-games have been a major success always. The plot never fails to impress the viewers.

In the year 2010 several treasure hunt movies released on the big screen, and a new trend of big franchise and universe setting movies were set. The popular Robin William’s Jumanji was released recently and the live-action adaptation of Dora The Explorer called Dora: The Lost City of Gold was also a success. Finding Ohana which is made on similar lines would be releasing sometime soon on Netflix.

Netflix will be releasing a movie based on the plot of the treasure hunt race. Their brand new upcoming movie is titled “Finding Ohana. The movie is directed by Jude Weng, and the script written by the popular comic book writer Christina Strain. The treasure hunting movie revolves around the life of two teenagers who embark on a holiday and discover their Hawaiian heritage. They get involved in a treasure hunting adventure and discover new things. Netflix released a teaser for the upcoming adventure. 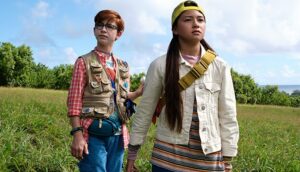 Netflix released a trailer of Finding Ohana which gives us an insight into the movie. In the trailer, we meet the siblings who have been brought up in Brooklyn. They travel along with their mother to meet their Grandfather. They travel to Ohau Island and have a hard time adjusting to the place as it lacks an internet connection.

Loane is disappointed to spend his senior year on an island. He rejoices when he meets a girl named Hana. Pili also befriends a boy named Casper and explore her Grandfather’s home. They find out that their Grandfather is about to lose his home. Pili discover a journal which she finds while exploring the house. The journal has information about the hidden treasure, and both the siblings set on an adventure to look for that treasure that can help their grandfather to save their home.

Finding Ohana is going to release on Netflix. The treasure hunting adventure can be streamed on Netflix from the 29th of January 2021. You can subscribe to Netflix to watch Finding Ohana and many other amazing shows.