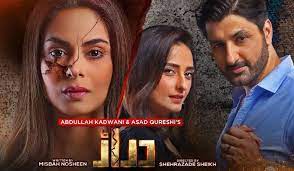 Daraar is a GEO TV drama that is directed by Sheherazade Sheikh and written by Misbah Nosheen. If you are a fan of 7th sky entertainment dramas, you shouldn’t miss out on Daraar. It is produced by Abdullah Kadwani & Asad Qureshi.

A lot of hit dramas under the banner of 7th Sky Entertainment have been highly successful. Daraar is gaining a lot of attention since its release. The drama lovers are glued to the screen every time a new episode of Daraar airs on GEO TV. Here is all you need to know about Daraar.

Who Is In The Cast Of Daraar? 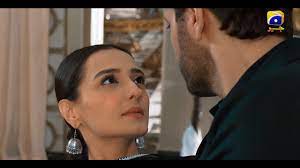 7th Sky entertainment doesn’t disappoint us with Daraar as the drama stars some of the biggest actors in the Pakistani drama industry. Syed Jibran plays the lead role in the drama. He is cast opposite Amar Khan and Momal Sheikh in a love triangle. Below is the list of the cast members for the Geo TV drama Daraar.

What Is The Concept Of Daraar? 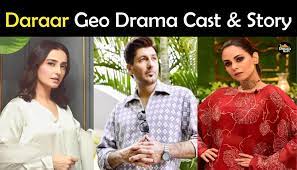 The story of Daraar explores the complex relationships between the three lead characters.  There is a lot of entertainment, emotions, and romance in the Daraar drama story. The viewers can expect to stay glued to their screens because it is packed with a powerful and engaging storyline.

Amar Khan, Syed Jibran, and Momal Sheikh are seen in a love triangle. Daraar has a dramatic story. Momal Sheikh is seen as a negative character in the drama. It revolves around the life of Irha, which is played by Amar Khan.

As a result of her parent’s death, Irha is now living with her uncle’s family. She supports her family financially and does a lot of hard work to support her uncle’s family. Her cousin Sajal is a stylish young girl who has a dream to live a lavish life. Sajal is involved with men who are helping her in fulfilling all of her desires early on.

Irha life changes dramatically when Shaheer Ahmed comes into her life. Shaheer is a wealthy businessman, who falls in love with her. The successful businessman has a humble nature and no one realizes how capable he is.

The story of Daraar will not disappoint. It will emotionally charge all the viewers with romance and full of suspense. If you love watching love triangles with a lot of twists and turns, then Daraar is for you.

When Does Daraar Air?

Daraar drama airs every Wednesday & Thursday night at 8:00 pm. You can catch the drama on Geo Entertainment TV channel.

Where To Watch Daraar Online?

If you have a busy schedule and are not able to watch the show on GEO TV at 8:00 PM you also have the chance to watch it online. Geo TV has an official YouTube channel and you can stream the entire list of Daraar here.

What Is The Release Date Of Daraar?