Christopher George Latore Wallace was a rapper and singer and is known by several nicknames. His nicknames include names like Biggie Smalls, Biggie, Frank White, Big Poppa, Notorious B.I.G. Biggie I got a story to tell is a Netflix series which is based on the life of the rapper. The series covers his life and cover everything from his childhood days till his success as a rapper. His untimely death shocked his fans and the world of rap became lonely as the rapper passed away.

Biggie: I got a story to tell the Release date

‘Biggie: I Got a Story to Tell’ is releasing on 1st March 2021. You can stream the show on Netflix from today.

According to the official Netflix YouTube channel, the show will be based on the life of The Notorious B.I.G. The cinematic documentary will be showing the journey of the greatest hip-hop artists and will also include the behind the scenes where Biggie will be seen creating classic songs. The fans will be able to witness the intimate and candid interviews with Biggie’s inner circle and they will be sharing stories about the rapper. never been told publicly. Biggie’s mother shared in an interview that: “This will be the first documentary to focus on the experiences of my son’s life rather than the circumstances of his death. It is a celebration of who he was and where he came from. This is how he would have wanted to be remembered.” 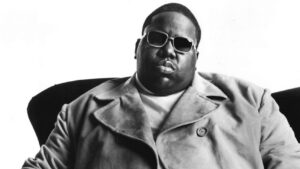 The documentary includes the rapper himself and footage when he was alive. The cast also includes his mother Voletta Wallace and Sean P. Diddy Combs. Biggie’s mother, Voletta Wallace was a preschool teacher and her husband was a politician. Her husband left her when Biggie was just two years old.  She raised him alone and worked two jobs to support them.

Sean John Combs will be featuring in the documentary.  He had a longstanding friendship with the rapper. P.Diddy signed with Biggie and the two rappers released some of the best works together. P.Diddy also worked on the last album of Biggie which was called ‘Life After Death’.

Netflix recently shared a trailer of the documentary. It shows the artist’s journey from Christopher Wallace to becoming The Notorious B.I.G. The trailer shows his unique style as a rapper and also highlights his laid backflow. The trailer features footage of the rapper and also shows his mother, Voletta Wallace and his friend Diddy. The trailer shows his journey of life until his untimely death at the age of 24. Christopher Wallace, known as The Notorious B.I.G., remains as one of the most memorable artists of all time. He will always be famous for his distinctive flow and unique lyrics. This documentary celebrates his life and also shares the testimonies of his friends and family.’