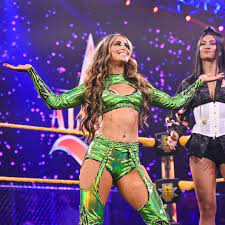 All the members of the WWE NXT roster are already surprised to see Mandy Rose make her return to WWE. She is going to host two important segments for the night. It seems more surprises will be coming for the fans and members of WWE. There is a roster trade with Rose moving to the NXT and Aliyah is also called up to participate. The last few appearances of Aliyah have been a treat for the fans as she snaps and turns on Robert Stone. However, Aliyah couldn’t defeat Kayden Carter and Jessi Kamea. All the segments between Rose and Aliyah have been a treat as it also involves Franky Monet. Many members in the NXT locker room are wondering whether she is back for good or not. Let’s take a look at more details:

Contents show
1 Will Aliyah be back to WWE for good?
2 Aliyah makes her way into RAW

Will Aliyah be back to WWE for good? 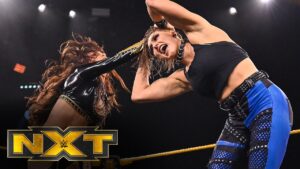 Fans are impatient and they want to know whether Aliyah will be back to WWE for good or not. WWE has been calling up for the main rooster and these rumors are doing the rounds for a month now. It is in the news that Aliyah has made a good impression on the officials and organizers. They believe she can spice up WWE and attract more audiences. The scouting trip has been a success and the organizers seem to be impressed with her. There is a lot of speculation going on among the wrestlers that Aliyah may move to AEW.

Her fans already know that Aliyah made her debut in WWE in March 2015. She became a part of “Takeover: Unstoppable” as a member of Tyler Breeze. Even though Tyler entered the game at that time but had to suffer a loss against Finn Balor. On June 20th, 2015 Aliyah could make her in-ring debut during the six women match. The NXT live event with her entry saw big success while her first TV singles match came out sometime later. During her NXT show, she suffered a loss against Carmella.

Aliyah makes her way into RAW 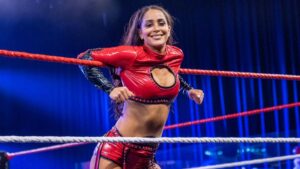 Aliyah has tasted success in whatever she has tried. She also got a chance to work for the Smackdown on January 3, 2017. Even though she had to face a loss to Carmella she got a lot of attention. Apart from that, she has been a part of the WWE Main Event episode that took place in March 2020. However, this venture also couldn’t get her first win as she lost to Natalya. It is bad luck or timing but she has mostly been on the losing side in most of the NXT matches. Hopefully, things can change for the better as she is moving to RAW and it seems the officials are also impressed. There is no confirmation yet on how Aliyah will make her debut at RAW but things look bright.

Dana Brooke is teaming up with Rose for the special on Monday nights. They both will be up against WWE Women’s Tag Team Champions Natalya and Tamina Snuka. For more details and confirmations don’t forget to check out this space!