These three fake news about coronavirus (Covid-19) circulated this week on social networks to confuse users.

The text has also circulated on Facebook without going viral.

Publications circulating on WhatsApp in several Latin American countries assure that the Air Force will spray the streets with disinfectant as part of the protocol to eradicate Covid-19. However, it is false.

The message also circulated since March 17 in Argentina, Venezuela, Honduras and Puerto Rico.

“Tonight, starting at 11:00 pm, no one will be able to be on the street, close doors and windows. 5 Air Force helicopters will spray disinfectant as part of the protocol to eradicate the Coronavirus. Spread it!” States a publication circulating to through WhatsApp.

A spokesman for the Uruguayan Ministry of Defense denied that the Air Force was going to carry out such an operation. Minutes later, the entity issued a statement in which it is assured that in no case will the Uruguayan Air Force carry out this type of task. Official communications will originate from the Public Relations Directorate of this Institution.

AFP Factual verified that an alleged complaint has circulated in Argentina, Chile, Colombia, Peru and Uruguay.

An image circulates on social networks in several Latin American countries in which it is denounced that “thieves disguised as doctors, nurses or members of the Red Cross” are robbing houses with the excuse that they are going to test for coronavirus. The text emerged in Madrid, Spain, where there are also no complaints about it.

“To all the neighbors, very important: thieves disguised as doctors, nurses or members of the Red Cross,” says a text that circulates as an image through WhatsApp in several Latin American countries at least since Wednesday, March 11, 2020.

In the photo, you can see a printed sheet stating that “as a result of the virus that is affecting the entire population, there are SKIMMERS AND SINCERES who are coming to the home posing as health personnel saying that they have been sent to do tests Coronavirus and they will even disinfect your home.”

The image, which has also been shared on Facebook and Twitter more than 1,900 times, also mentions that “health is not sending staff to any address” and that it is actually thieves who are “breaking into some houses, robbing and robbing those who inhabit it.” 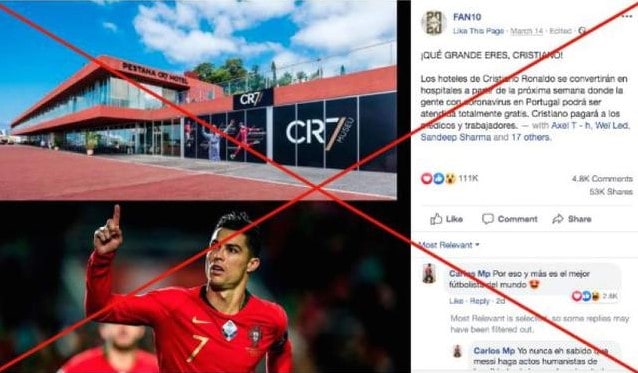 The news went viral from March 14.

Cristiano Ronaldo has not (yet) offered his hotels as hospitals due to the coronavirus pandemic.

Users on social networks and the media published, without citing sources, that the Portuguese soccer player Cristiano Ronaldo gave up his hotels so that they could be transformed into hospitals where people affected by the new coronavirus were treated.

The news has been shared by hundreds of thousands of people in various languages. But a spokesman for the hotel chain said the information is “wrong” and the striker has not commented on the matter on social media, where he has expressed himself about the pandemic.

One of the most viral publications in Spanish, dated March 14 and shared at least 53,000 times, says: “Cristiano Ronaldo’s hotels will become hospitals starting next week where people with coronaviruses in Portugal will be able to be attended totally free.

Cristiano will pay the doctors and workers ”and similarly, others arising the same day are expressed.