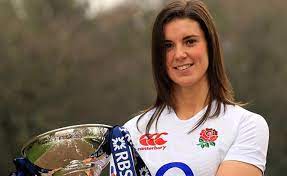 England skipper Sarah Hunter will miss the upcoming game as she is injured. Hunter, 36, is suffering from an injury. She got injured during the 69-0 victory over Ireland on Sunday. England faces France in Bayonne and the captain will skip the match due to her injury.

She might not be able to recover in time to face the Red Roses’ closest rivals. Poppy Cleall will fill the void in the back row. Hunter won her 134th cap on Sunday. She will still be travelling to France to assist with preparations.

England and France have shown progress in every match that they have played. The Grand slam decider will have four successive bonus-point victories. The two teams will be playing at the Stade Jean Dauger in Bayonne on Saturday. England is among the favourites to win the fourth consecutive Six Nations title.

You can follow along with live updates of the match between France and England from 2.15 PM on Saturday. 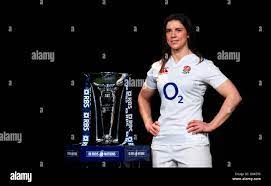 England openside Marlie Packer scored a hat-trick. The Red Roses made an opening attack and achieved the 57-5 Six Nations victory over Scotland in Edinburgh.

Emily Scarratt achieved five conversions, and Helena Rowland one. Scotland’s only points came from a try for full-back Chloe Rollie. They were unfortunate and could not score more.

Lydia Thompson achieved a hat-trick and the team made history with a 74-0 victory over Italy. The bonus point was secured by half-time in Parma. The fellow winger McKenna, Lark Davies, Shaunagh Brown and Alex Matthews also helped the team to beat Italy. Vicky Fleetwood, Sarah Bern and Emma Sing and other players worked together to win the match.

England achieved a third dominant victory and became the strongest nomination of getting the Six Nations title. The team beat Wales 58-5 at Kingsholm in the championship.

Davies and Breach added second scores to their name. Bern, Matthews, Brown, Scarratt and Sarah Hunter also helped the team to win the match. Zoe Harrison added up four conversions and played a part in the victory.

Davies (two), Bern, Packer, Thompson (two), Cleall (two), prop Hannah Botterman and Ellie Kildunne (two) scored high to contribute to England’s victory. The Test played out in front of the 15,836 supporters at Welford Road. A new record was made as the women’s rugby match in England continued with exceptional performances by the players. Scarratt was given a guard of honour when she took to the field for her 100th cap.