Netflix’s Dark Finale: Thought and Theories About the Ending

It’s been a while since the popular Netflix series Dark, wrapped up. The final episode was released on June 27, 2020. The time-traveling and supernatural elements made us intrigued and addicted to the show. The people who binged watched Dark and are still thinking about why certain things happened in the final episode will find this post entertaining. We will be discussing the ending of Dark and will be sharing our personal thoughts on the ending and the overall show.

What is so unique about Dark?

The monotonous lockdown routine has made us suffocate inside our home but it is all thanks to this wonderful show that we were able to handle the boredom. All of those who got hooked to the Dark World of the show know what we are talking about. The brilliant creators of the show Baran bo Odar and Jantje Friese gave us what could be the best sci-fi work ever. Normally most ex series answer the audience questions as it progresses but Dark is one such show that has a complex web of multiple realities and universes. The characters are also unique and each episode takes us on a new ride.

What is Eva’s Plan in Dark? 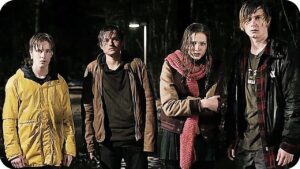 Eva doesn’t take long and just a split second and sends one version of Martha and saves Jonas The others try to stop Martha but she ends up saving Jonas by sending Bartosz to intervene. She ensures and makes sure that the loop between new worlds is preserved and her son who is presumed to be dead is alive.

Jonas starts to live as Adam in one reality and turns into a villain and kills Alt-Martha and their son. In the alternate Universe, he dies and the son survives. Adam and Eva and their extreme efforts to achieve their respective goals keep the plot intact. Adam feels that the origin of all the sins and disaster is his son, and if he kills him, he can save his Martha. However, Eva strives hard to keep her son alive.

What is Claudia’s Plan in Dark?

How was the ending of Dark?

When Claudia figures out everything about the alternate worlds, she uses the time stands still second and manages to meet Adam. She tells him the truth behind everything that has happened. She tells him to send Jonas to get Alt-Martha and tells him to travel to the origin world and finally put an end and prevent the accident.  The two versions of Jonas and Alt-Martha had never met before but they are still drawn towards each other.