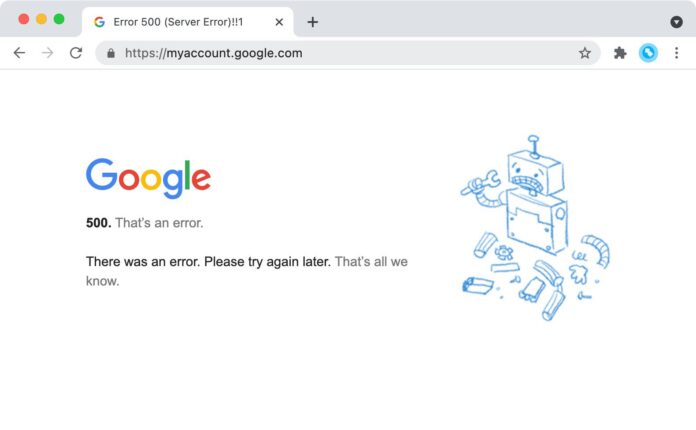 Google’s applications, including YouTube, email and Docs, have experienced a rare service outage, and users are unable to access many of the company’s services.

The outage began shortly before noon UK time and lasted over half an hour before being restored.

Google’s search engine, however, was not affected by the problems affecting its other services.

The brief outage had a significant impact on the company’s millions of users, many of whom rely on Google services for basic work applications like email and calendars.

Google Docs users could continue working if they had synchronized documents offline, but could not use any online functionality.

It also affected Google-connected smart devices like their home speakers, leading some users to complain on social media about not being able to turn off some lights in their homes.

I’m sitting here in the dark in my toddler’s room because the light is controlled by @Google Home. Rethinking… a lot right now.

It had a knock-on effect on other apps as well, with players of the Pokémon Go smartphone game, for example, reporting that they were unable to log in.

Despite the widespread outage, Google’s service dashboard initially showed no errors, before turning red across all services.

“We are aware of an issue with Gmail that affects the majority of users. Affected users cannot access Gmail,” the statement said, with the word “Gmail” replaced by other services.

The cause of the problem is not clear. However, during it, users could still access the landing pages of the websites in “incognito mode”, which does not store a record of user browsing activity.

Google has been contacted for comment, but a spokesperson said they were unable to access their email during the outage.

Such failures in Google’s systems are rare, although a problem with some servers caused difficulties for US users in June 2019.

In that case, the culprit was a server configuration change that was supposed to apply to a few machines in a specific region, but was accidentally applied to many more.