Christ On The Cross: The Most Famous Crucifixion Paintings 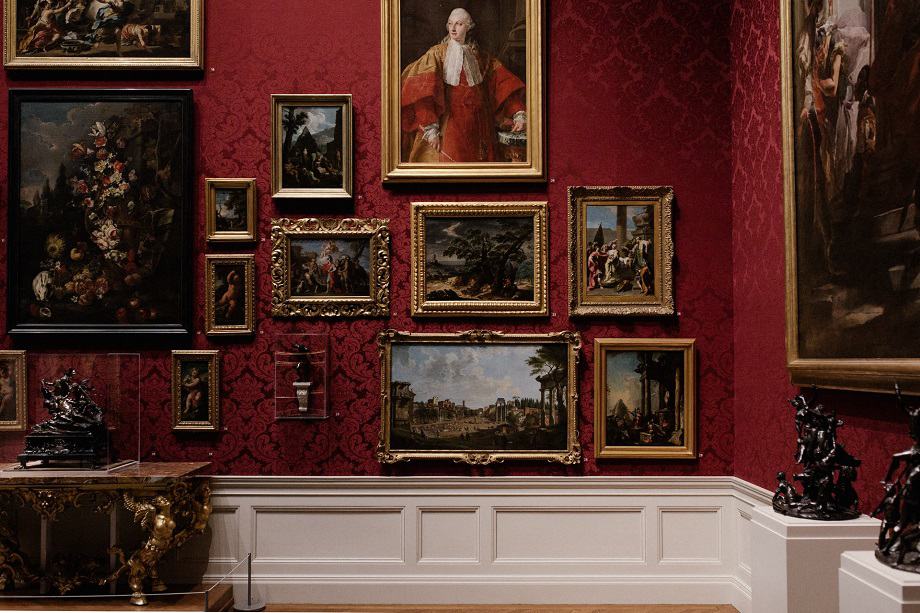 Since the beginning of time, religion has always looked to art to inspire adoration and depict symbols and events of their faith. Therefore, aside from the usual portraits and still life drawings, paintings inspired by religion take the cake amongst the most inspirational and cherished art pieces.

For Christianity, the crucifixion of Jesus Christ and the apostles have encouraged many to produce true art showing the sadness, grief, and divinity in those moments of death. Here are five famous and truly inspiring paintings involving the crucifixion.

Christ on the Cross (1632) by Diego Rodriguez de Silva Velazquez 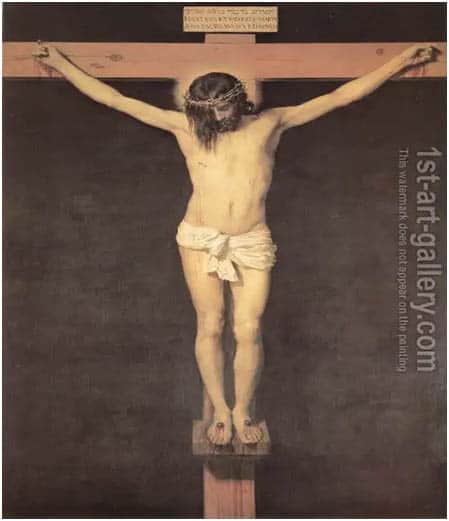 Also known as Christ Crucified, Christ on the Cross is Diego Velazquez’s rendition of a Jesus crucifixion painting. It features a bright halo around the crucified deity’s head and blood dripping from his hands and feet where the nails pierced through and into the wooden cross.

Furthermore, where other historical crucifixion paintings feature both feet nailed together to the wooden platform, Velazquez leaves the feet apart. The artist also leaves darkness around Christ, drawing your eyes to the sacrificed deity.

It is believed that Christ on the Cross was a commissioned painting for The Convent of San Plácido. Eventually, the painting ended up in the ownership of Manuel Godoy, a former First Secretary of State of Spain, and was among the items impounded.

The Baroque-style painting is housed by Museo del Prado, a Spanish art museum located in Madrid, and measures 249 x 170 cm. Due to a lack of accurate data, the specific year Diego made the painting is unknown. However, historians pegged the work between 1631 and 1632, after Valazquez returned from Italy. 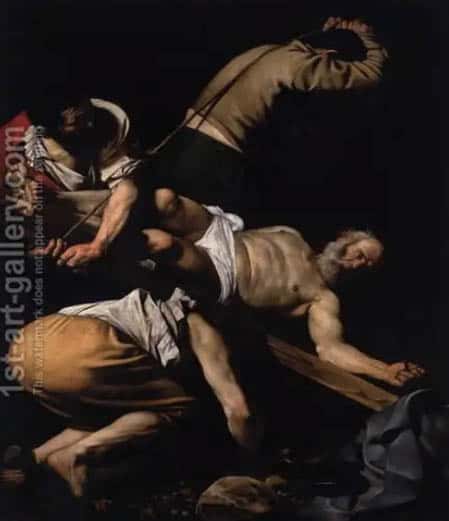 The Crucifixion of Saint Peter, Crocifissione di Dan Pietro in Italian, is a 1601 Baroque-style oil painting by Italian artist Caravaggio. At 230 x 175 cm, this marvelous crucifixion painting goes against what others depict.

Instead of depicting Saint Peter upside down on the cross, Caravaggio showed the process of pulling Peter and the cross up. As a result, you may begin to feel how Peter felt and perceive the charged atmosphere as they strung him upside down to die for his faith.

How this painting came about is a redemption story on its own. Caravaggio was seen as an unsavory and violent individual but was later accepted when his paintings took off and were commissioned in 1599 to produce two paintings about the life of Saint Matthew for the church of San Luigi dei Francesi in Rome.

The sensational success of those two paintings led to a commission for the Church of Santa Maria del Popolo. It was for them that Caravaggio painted The Conversation on the way to Damascus and The Crucifixion of Peter.

Descent From The Cross (1634) by Rembrandt Van Rijn

Rembrandt Harmenszoon van Rijn is known for his religious depictions in his paintings, and his 1634 piece, Descent from the Cross, is one of many. It’s currently located in the Hermitage Museum in St Petersburg and is a 158 x 117 cm painting depicting Jesus being brought down from the cross after his death.

Rembrandt’s crucifixion art features three groups of people, each performing different tasks. He expertly used complex lighting to create a sense of hierarchy and show the importance of each group in the scene.

The brightest and most central subject in Rembrandt’s Christ on the cross painting is the group carrying a realistically depicted Christ down from the cross. The curves of his body and the way it seems to hang limply and twist unsettlingly push forth the idea that the body is indeed lifeless.

Second is the group on the right comforting Jesus’ mother, Mary, who has fainted possibly from grief and stress of losing her son. The third and most minor lit group is the women on the left who are laying down what seems to be a burial robe with which they’ll bury Jesus.

Tiziano Vecellio stuns the viewer with his Jesus on the cross art, Christ Carrying the Cross. Here, Christ is seen carrying the cross and turning away from a man tightening a rope around his neck, while another man has his back turned to the main event of the painting.

Using dark colors and close-up composition to give it a life-size feel, Tiziano invites the viewer to observe, understand, and even partake in Christ’s suffering as if they were present at the time. Christ seems to gaze at the viewer of the painting as if communicating unspoken words.

It’s no wonder that rumors began about the painting having healing and divine properties. It became the subject of adoration and reverence when religious people who prayed before it testified of having been cured of sicknesses.

While the crucifixion painting lives on as a great work of art, its authorship remains in contention. Various historians attributed the painting to another Italian painter, Giorgione. However, Giorgione and Tiziano belonged to the same artists’ guild and worked during the same period.

Tiziano had collaborated with Giorgione on previous works before this crucifixion art and had a similar style and approach to art as Giorgione. However, the active participation and robustness of the painting’s characters are signature elements for Tiziano.

Giovanni Bellini’s Jesus on the cross is a 49 x 81 cm oil painting of Jesus Christ crucified on the cross of Galilee. It uses Tempera on the panel and is currently hanging at the Museo Correr in Venice.

By painting Jesus on the cross with his choice of colors and composition, Giovanni’s work strikes a chord of loneliness and rejection at first glance. Central to this piece is a pale Christ nailed to the cross by his hands and feet, and Mary and St John at the bottom painted with solemn faces as if in mourning.

Also in the frame are soldiers guarding the scene and people going about their business after a seemingly triumphant crucifixion. While the Holy Bible quotes Jesus asking God The Father why he has forsaken him, this painting portrays this event as one where humanity forsook Jesus.

As with many facts of history, the actual dating of this piece is in dispute. Some believe it was produced between 1501-1503, and others say the style of this crucifixion painting is more in tune with Giovanni’s 1455-1460 works, especially the Transfiguration piece.

Paintings and all artwork of religion hold a place in the hearts of those who can relate to them. In the case of Christians, the crucifixion is a symbol of their faith and hope in Christ and God The Father. Undoubtedly, these paintings capture it perfectly.

What is a Bluetooth crane scale? What is it used for?