Former WWE NXT star Bobby Fish has always given power packed performances to entice fans. He believes in giving his best and is getting ready for the next match against Sammy Guevara. The upcoming TNT championship match is already making a lot of headlines. Bobby has recently won a championship against Miro at AEW Dynamite. All the wrestling fans must be anticipating and want to know who the real winner will turn out to be. During his recent interview he reveals his thoughts to the hosts Dave LaGreca and Bully Ray in the interview. Here is what he has to say about the upcoming TNT title match:

Contents show
1 What did Bobby say about his upcoming match?
2 What can fans expect from Bobby Fish VS Sammy Guevara?

What did Bobby say about his upcoming match? 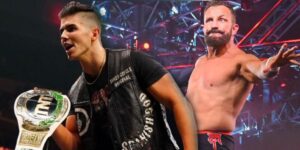 It seems that Bobby is preparing himself well for the upcoming match against Sammy. He revealed his thoughts in a recent interview. Let’s look at what he has to say:

“I’m home watching AEW just like everybody else,” Fish said. “And I see this thing go down, and I’m thinking to myself, ‘okay, fortune favors the bold. And that title, and this mustache, would look friggin’ fantastic together. I’m like, ‘listen, I can sit on my hands here and do nothing or I could put my name in the ring, so to speak, and see what happens.’ So that’s what I did.”

The hosts asked him many interesting questions and his answers were satisfactory too. He was asked how winning this title will change his life or what are his plans ahead? Bobby believes winning the title is all a part of his plan as he wants to deliver the best. It will be easy to keep up his pride and give power packed performances. He is planning to do his best against Guevara and will make a statement by winning the title of TNT. This is what he says:

“That’s the plan, man,” Fish said. “Like I said, man, I looked at that title and I got this mustache – they would look great together, and the only way to take that from him is to go and take it from him. So that’s what we’re doing.”

What can fans expect from Bobby Fish VS Sammy Guevara? 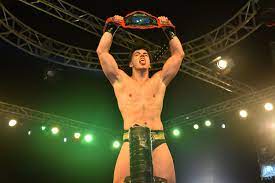 As we have discussed before the upcoming match against Fish and Guevara will happen next week. AEW Dynamite is making fans happy with one interesting match after the other. Sammy will try to defend his TNT title will Bobby will do his best to grab the opportunity of winning.

The show will also feature some of the best backstage moments. Both Bobby and Adam Cole will share a locker room together. There is no doubt Adam is the undisputed era stablemate. He will soon team up with Young Bucks and Kenny Omega. The group will be taking on Bryan Danielson, Christian Cage, Jungle Boy and Luchasaurus. There is a lot in store for the wrestling fans so keep your schedule free. You can catch up with all these interesting wrestling matches live.