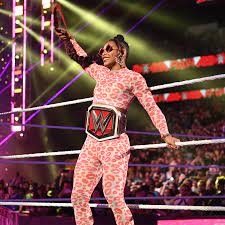 Bianca Belair is the “WWE Raw” Women’s Champion. She believes in giving impressive performances for all the wrestling fans. Due to her hard work and talent she has achieved a lot in her career. Nowadays she is spending her time on the road with her husband Montez Ford.

She is getting her share of positive and negative on this story. Bianca accepted the fact the Montez ribbed her when she came to the roster for the first time. In a recent interview she openly talked about ‘The Usos’ as Montez believes ‘they aren’t twins’. Bianca believed at first believed that they look like each other. Here is an interview of Bianca below:

Bianca Talks About Spending Time With Her Montez On the Road 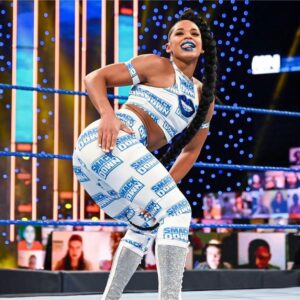 Nowadays Bianca is spending most of her time on the road with her beloved husband Montez Ford. At first Bianca was shocked to see the similarity in look ‘The Usos’. She and her husband joked about joke about the both not being twins. As she believed her husband this confusion went on for many months altogether. Here is what she has to say about it.

“I was in the locker room one day talking, and I was like, ‘I can’t believe The Usos aren’t twins,’ and [the other talent] looked at me like, ‘What are you talking about? They are twins’. So I’m like, ‘my husband told me they aren’t twins’’.

“I was so adamant about it, like, ‘No, they’re not, they’re not twins,’ and they’re like, ‘What are you talking about? Yes, they are.’ And I was like, ‘Okay, nevermind,’ and so I go to my husband, ‘Why did you tell me that?’ And he was like, ‘I don’t know. I was just messing with you,’ I was like, ‘I actually said it out loud in front of people,’” she recalls in her recent interview. 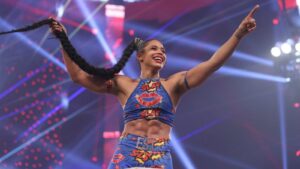 Bianca talked about all the celebrities that are coming into the events of WWE. They compete with each other at WWE SummerSlam with Logan Paul. She didn’t shy away from praising ‘The Miz’. You will be surprised to know that she claimed it’s “a testament to how amazing a superstar is”. He is mostly chosen as an opponent for many other wrestling stars. It puts up a lot of pressure against wrestlers when they are against ‘The Miz’.

Over all these years WWE has brought in many talented wrestling stars on the roster. However, most of them are involved working for the men’s division. This is something the EST of WWE will be hoping to change in the coming years. Here is what she has to say on this matter:

“I haven’t been approached yet, but I would be very open to that. “We were just talking about how there’s been a lot of male crossover into WWE on the male side, and when are we going to have a female? Who’s going to be that female that’s going to crossover into WWE and really show up and show out?”

It is not clear whether any female celebrities are willing to step inside the WWE ring or not. Bianca makes sure to announce that she is open to take up this challenge. There are some other prominent wrestling stars from hip hop world she will love to interact with.

. “Cardi B, Nicki [Minaj], Meg [The Stallion], whoever wants to come out, I am a huge fan of them. They can come and get in the ring; we can tag team. They can come and perform, bring me out, let me come out to their music, my entrance music. Let’s collab. Let’s make something happen!”

There are lot of people who already know that Cardi B loves wrestling. She has shown her love for the sport in most of her tweets. Due to this reason WWE veteran Tamina started to offer her to teach a bit of wrestling. If you want to get more updates on wrestling keep checking this space!