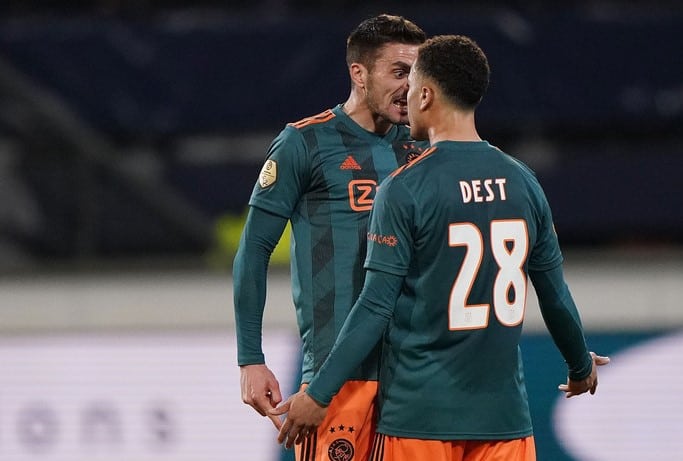 Ajax knows again what winning is. The team from Amsterdam played a difficult first half but took a break from SC Heerenveen in a few minutes.

Four minutes before the break Ajax’s frustrations came to the surface. Dusan Tadic accused Sergino Dest of not following the agreements, after which the young American right back served the Serbian leader in reply. Tadic relentlessly bit away. The image once again indicated the high voltage that prevailed in Amsterdam.

Ajax had to and would win in Heerenveen. On the hunt for a change, Erik ten Hag kicked his base team up again. Daley Blind was again central in the defense, Hakim Ziyech played at 10 and Lassina Traoré was allowed to head forwards. But the most striking choice was that for Jurrien Timber. The 18-year-old defender started as a central defender alongside Blind. Perr Schuurs and Edson Alvarez, who in recent weeks filled the vacant position of the injured Joël Veltman, started on the bench.

Timber played a creditable game but soon ran into a yellow card. Ajax was looking for the opening goal, got chances via Quincy Promes, Tadic and Traoré, but was pleased that it was still scoreless without a goal. Chidera Ejuke, in particular, was a constant scourge for the Amsterdam defense in the counter. The Nigerian attacker missed two big chances, but just before the break gave the ball to Alen Halilovic on a silver platter. The attacker, however, hit the ball hopelessly wrong at a meter from the goal, as a result of which SC Heerenveen did not go into half-time with a lead.

In the second half, the first big chance was for Joey Veerman, but again Onana with the help of the pole made a save. Subsequently, a goal festival broke loose with four goals in ten minutes. The aggravated Tadic took Ajax by the hand with two goals in three minutes. A few minutes later, the captain was at the base of the third Amsterdam goal with a sharp pass. Traoré initially missed the imposed opportunity, but in the rebound, Promes was still accurate.

Ajax was finally loose, the relief was very big on the Amsterdam side, but three minutes after the 0-3 Mitchell van Bergen brought the tension back after a good action and diagonal shot. In the final phase, however, Ajax no longer ran into problems, as a result of which the leader was finally relieved. After four defeats in the last five games, with elimination in the Europa League and KNVB Beker, the win over SC Heerenveen should bring peace and confidence back to the capital.

Past! Ajax wins another match in the Eredivisie in Heerenveen for the first time since 16 February and jumps over AZ again on goal difference.

End of the second half

SC Heerenveen is giving something back. It is Mitchell van Bergen who takes care of the fourth goal within ten minutes. He shoots the ball in the far corner behind Andre Onana.