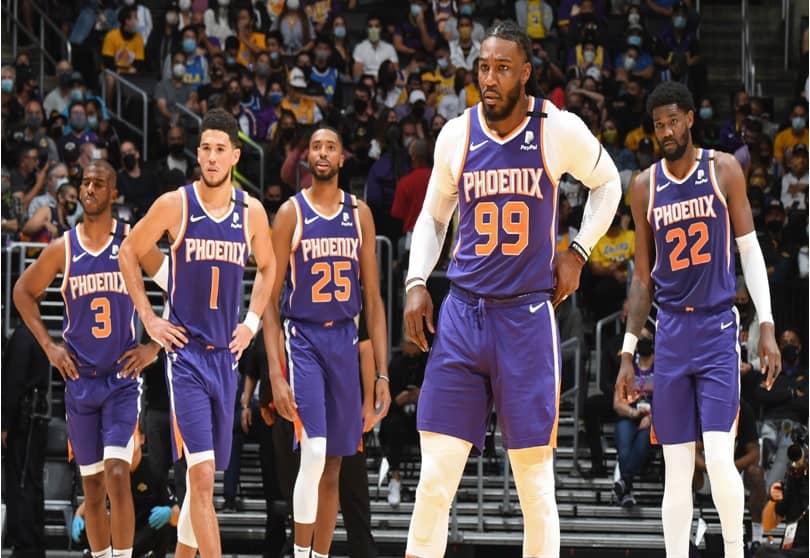 Paul played 29 minutes, recording 23 points, five rebounds and 14 assists in the Suns’ first win of the 2021-22 season. The victory prevented Phoenix from entering an 0-2 hole to start the season.

CP3 is also just one of six players in NBA history to reach 10,000 career assists; the other being Laker legend Magic Johnson.

Paul is averaging 14 points and 11.7 assists per contest through Phoenix’s first three games.

They may have started slow, but Phoenix currently has the fifth-best 2021-22 NBA Championship odds at +1300 at Arizona sports betting sites.

It doesn’t sound like the Suns are close to reaching an extension with star center Deandre Ayton, the first overall selection of the 2018 Draft.

If the two sides do not reach a deal before the end of the season, Ayton will become a restricted free agent. He would be able to sign a contract with another team, although the Suns would have a chance to match any offer.

Though the two sides couldn’t reach an extension, this doesn’t mean the Suns are looking to deal their young star.

One NBA GM told Sean Deveney of Heavy.com that an Ayton trade is “definitely not” an option right now.

Through three games, Ayton has averaged 10.3 points and eight rebounds per contest. Ayton, in his fourth season, has career averages of 15.9 points and 10.6 rebounds.

The Suns have two of their core players, Paul and Devin Booker, signed to long-term deals. Extending Ayton would go a long way in keeping the team’s championship window open for the foreseeable future.

The Suns opened the season with a 110-98 loss at home to the Denver Nuggets before rebounding with a road win over the Lakers on Friday.

The following night, they were entirely overmatched by the Portland Trail Blazers, who cruised to a 134-105 victory over Paul and company.

But the Suns will return home this Wednesday against the Kings to commence a five-game homestand.

After the homestand, they’ll visit the Kings (Nov. 8), before coming back to The Desert on Nov. 10 for a contest against the Trail Blazers.

So the door is wide open for the Suns to string together some wins and reclaim their stake as a top contender in the difficult Western Conference.

The Suns’ 1-2 start is nothing to panic about, given the difficult stretch to open the season. Other heavyweights in the Lakers (1-2), Brooklyn Nets (1-2) and Los Angeles Clippers (0-2) have also looked sluggish in the early going.

But Phoenix’s big three of Ayton, Paul and Booker should have little problem helping Phoenix take at least four of the five games on this homestand. The Kings, Cavs, Rockets and Pelicans just don’t have the star power to match up with Monty Williams.

The Suns ‘high-powered offense will propel them to four straight W’s, but Trae Young and the Hawks will foil their attempt at a 5-0 homestand by outlasting Booker and company in a high-scoring affair.