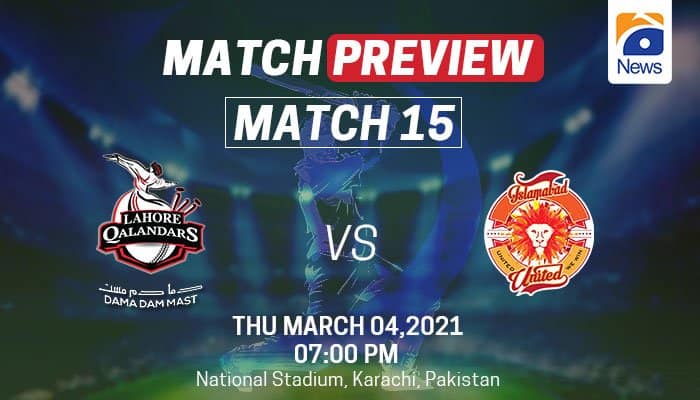 Pakistan Premier League (PSL) 2021 is getting more entertaining each day as every team is working hard to win the trophy. Fans are also speculating and excited to know who will take the trophy away. The 15th match of PSL will have Lahore Qalandars and Islamabad United up against each other.

Both the teams are going to play their fifth matches and it will be interesting to see how the clash will turn out. If you are a cricket lover you will already be following each match. Currently, both teams have earned a good position at the points table. Islamabad United holds the third position and Lahore Qalandars is occupying the fourth position. Here are some details about today’s match and we will be given a review and prediction too.

The performance of Lahore Qalandars has been good so far as they have won three games out of four they have played. Many people have appreciated their performance as they have been in top form this entire tournament. Mohammad Hafeez has made a score of 181 runs that consists of many half-centuries too.

However, Fakhar Zaman has soon become the leading runner of this season by getting 189 runs. South African cricketer David Wiese has also been in top form and made match victory runs in the last match. He made a 31 not out from just 9 balls that is massive. If we discuss the bowler Shaheen Shah Afridi has taken a total of nine wickets in just four matches. Here is a list of the full squad below and you can check the list of players.

The performance of Islamabad United has been similar to the other team. They have won three games out of four and are a strong contender in this game. Paul Stirling has been their star as he has made fifty runs in the last game itself. Alex hales who is an English cricketer has also been in good form and has scored good runs so far. Iftikhar Ahmed and Hussain Talat have also scored 40 each in the last few games. If we talk about the bowlers Hassan Ali has got 6 wickets while Faheem Ashraf and Mohammad Wasim have got 4 wickets in the games. Both the teams have enough margins to win today’s game so let’s see what happens. Here is their full squad.

Match Prediction: Who will win?

Looking at the performances and winning rate of both teams they hold an equal chance of winning.it will depend on the circumstances they have to face today or how good the performances here. All the sports lovers can enjoy watching the match live on Geo super. You can keep supporting your favorite team and do let us know your comments below.