Christopher Michael Pratt popularly known as Chris Pratt was born on June 21st 1979 in Virginia, Minnesota. He is known for his good acting and amiable charm that offers a diverse range. Whether it is comic nitwits or heroic lead role he fits in everything pretty well. If you are his fan you will be happy to know that he gained a lot of fame through television series. Later he tried his luck in movies and went on to become a movie star. 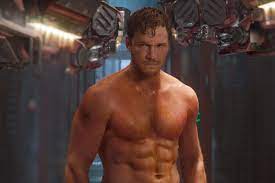 Mother of Chris worked at a grocery store while his father was working for mining and home building. When he was a kid Chris moved from Minnesota to Lake Stevens, Washington. This talent runs in him since he was in high school. He became a part of community college acting classes. Later he acted in a community and dinner theater. However he soon dropped out and moved to Hawaii.

He did odd jobs to make ends meet and even lived in a tent for some time. While working at one of the restaurants he met famous actress Rae Dawn Chong. She helped him get a role in her short comedy horror movie Cursed Part 3 in 2000. Due to this work he decided to remain in LA and pursue his acting accordingly. Chris started his career by doing some minor roles. He was cast for a high school jock in a popular drama series named Everwood. As this series ended he soon got another role in the final season of O.C. Since then there was no looking back and he appeared in the popular comedy Parks and Recreation (2009–15).

He was loved for portraying a clueless Andy Dwyer. You will not be surprised to know that this show became a cult favorite. It was a good breakthrough for Chris and he landed a lot of movie roles ahead.

Chris Pratt believes in breathing life into every character. He gives a sincere performance that touches everyone’s hearts. His fan following increased and he got a block busters in Jurassic World (2015).  It gave a big boost to his career and he continued to surprise his fans too. Here is a list of his popular movies: