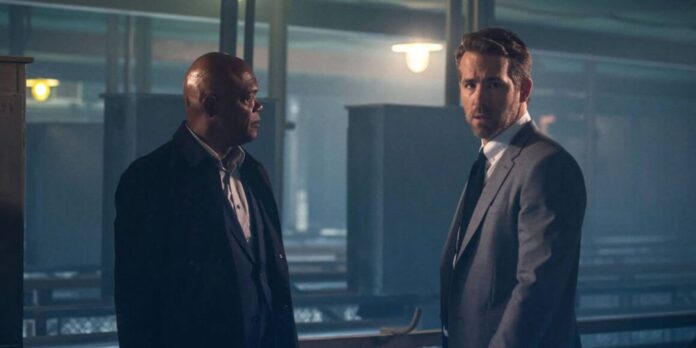 The 2017’s action-comedy titled “The Hitman Bodyguard” came to our screens and made our hearts flutter with laughter and joy. A sequel for the movie was announced two years back and we have finally received the first look of the Salma Hayek starrer adventure movie.

The Hitman’s Wife’s Bodyguard follows the story after the events of the original The Hitman’s Bodyguard. It will focus on Micheal Bryce as he is seen growing his friendship with Darius Kincaid. The film was a commercial success and grossed over $180 million at the box office. The movie was on hold due to the pandemic, and the first look has finally been released recently.

The Empire Magazine revealed the first-hand image of the upcoming sequel titled The Hitman’s Wife’s Bodyguard. The image revealed that Antonio Banderas will be the movie’s main villain. The image of him is having an upper hand over other main characters of the movie and it seems like he will have a major part to play in the movie. Samuel Jackson and Salma Hayek are being intimidated by Antonio Banderas, and we also witness Ryan Reynolds in much worse condition.

Not many details are revealed about the movie’s plot, and the movie will be set four years after the events of the 2017’s The Hitman’s Bodyguard. Micheal Bryce plays an executive protection agent and is played by Ryan Reynolds. He develops a good friendship with Darius Kincaid, who is a notorious hitman. This friendship will be continuing in the upcoming sequel and the fans will get the chance to see the duo embarking on an adventure. They will be seen saving Darius’s wife Sonia Kincaid played by Salma Hayek. 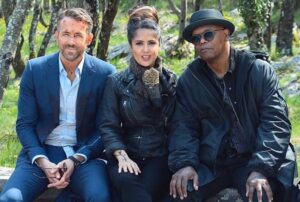 The cast of The Hitman’s Wife’s Bodyguard includes Ryan Reynolds who will be reprising his role from the original film. He plays the -A-rated executive protection agent and CIA officer. The cast also includes:

The Hitman’s Wife’s Bodyguard is directed by Patrick Hughes. The show has been scripted by Om O’Connor and Brandon and Phillip Murphy. The project is being handled by Millennium Media and Campbell Grobman Films and distributed by Lionsgate. The movie was due to release on August 28, 2020, but due to the Covid-19 pandemic; it got delayed and has been kept on hold. The new scheduled date for the release of the movie hasn’t been announced as yet. We will update you with the latest release date as soon as we get some official news regarding the release date.