is Always flushed back on Facebook the photo of a pledge ring in my Timeline. Pledge rings, the Devices with round Openings for bottles, which can be attached in various German cities waste bucket. So passers-by who want to get rid of your bottle can leave these in it, instead of throwing them in the trash. And needy bottle-collectors, who rely on the few Cents for a bag of returnable bottles, don’t have to rummage in the trash can.

“A great idea”, I read every Time hundreds of times under such Postings in the comment column. “Why is this not everywhere?” The sound then quickly becomes challenging. “A great idea”, thought I – a few years ago. Before the project in Hamburg, where I live, has been implemented. After a few weeks you could see anywhere, why not every city is immediately convinced of this great project. In the Openings of the pledge rings no empty bottles, but disposable coffee cups, crumpled Newspapers, or Almost were, namely,-Food-packaging. For what was actually in there was no more space. Bottles were thrown in the trash, or next to it on the floor. In the case of plastic bottles a semigute solution, because the next gust of wind comes.

Apparently, instead of the (few, it is for passers-by, who seem to be always somehow in a hurry, easier to stuff your garbage in a pledge ring!) To make an effort to aim in the Opening of the directly overlying trash can. Or, well, open well, in the somewhat cumbersome models a flap. Not two seconds, the people seem to be thinking about that, you’ll destroy a very good idea. Many, especially children and teenagers, is perhaps not entirely clear what the rings are used, but any reasonably informed adults are likely to have in the meantime heard of it.

In Cologne, Osnabrück, Karlsruhe and Hannover, the project has failed. The lower Saxon town of Hildesheim, completed a Test at the end of January for the same reason, after a few months. “Because the pledge rings to Dispose of To-Go cups of misuse, builds the city of the containers at the station now,” says the “Hildesheimer Allgemeine”. It is tearing the hair.

of Course, it can be argued that, apparently, the Design of waste bins and / or pledge rings is not perfect is not when people use both in the sense of the inventor. In addition, the policy is, in many cities, anyway, unsure of what to make of the pledge rings, since their introduction would amount to a confession that in the city in question is actually human life, which are so poor that you would be happy about it. The city cleaning is often a sceptical, since the experience of some cities, say, pawn rings would be more likely to lead to more than to less waste in the streets.

The Problem is not the policy, the Problem we are

But if you leave all that aside and just looking at it, why the project collateral-ring fails in many cities, when it has taken all the political hurdles and, indeed, was introduced, then it fails on us. Not only a few semi-strong, not only to someone who has really in a hurry (wife, Baby, time bomb must be defused, etc.), but a large, large number of people. People, where the needy are, apparently, not care, or, if you want to quickly dispose of your waste, simply irritating lazy. If the rings are permanently clogged with garbage, you lose all sense. Then you will be a bleak parody of the good Purpose for which they were intended.

“Why is this not everywhere?”, in the comments under the enthusiastic Facebook Postings. The answer is devastating: because of us. The idea is good, but humanity was not ready. Too bad. 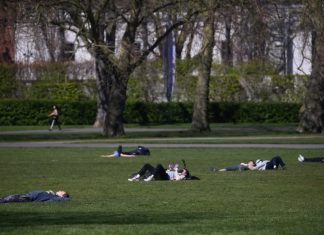