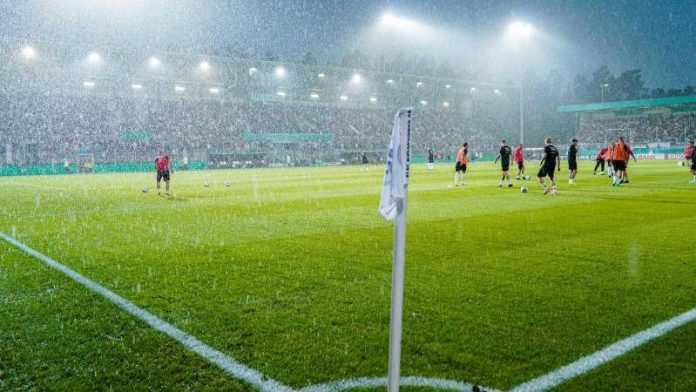 Violent storms swept on Friday night over large parts of southern Germany and the fire brigade have brought numerous applications.

thousands of visitors a music festival were surprised at the border between Bavaria and Baden-Württemberg from the heavy rain and had to leave the concert area, a police spokesman said. In the southwest of Luxembourg, a Tornado caused severe damage to a number of people were injured, according to information from the government of Luxembourg – some hard.

A spokesman for the Luxembourg police have reported a “swath of destruction”, which drew only about five to seven miles. Several buildings were uninhabitable, and emergency shelter has been set up. In the towns of Pétange and Kaerjeng were covered according to the authorities, a total of approximately 160 houses, or otherwise damaged. More than 1000 emergency calls were received within a few minutes, the police and the fire brigade, called out to numerous missions.

Also on the German side – in the neighbouring Saarland, Rhineland-Palatinate and Baden-Württemberg – there was severe weather. In Rhineland-Palatinate, particularly the towns of Neuwied and Koblenz were affected. Here are Manhole covers were stranded and streets flooded, as a spokesman for the police Bureau, Koblenz said.

In Bavaria, it was clear the concert area of the Taubertal-festival. The music fans were asked to search in their vehicles or in the town area of Rothenburg protection, the police announced. Around 400 of the 15 000 daily visitors temporarily protection in a multi-purpose hall. Several people were injured by flying objects.

In Baden-Württemberg, the impetus of the German DFB Cup game between the football clubs, SV Sandhausen and VfL Borussia Mönchengladbach, was delayed due to a thunderstorm. In the case of heavy rain in the meantime, the flood was assumed to be light in the Hardtwald-stadium of second division side Sandhausen. The spectators in the lower ranks were asked to bring in security.

In the district of Heilbronn were flooded roads, trees fell and damaged cars. In Neckarsulm, a circus tent of a gust of wind is captured and a crashed. In the upper ice home was damaged in a sports hall and threatened to collapse. The Technical relief organization secured the building.

In the case of a lightning strike in baden-württemberg, Rosenfeld-the Holy rooms were injured, 15 of the players. It was struck by lightning during training on Friday evening in the vicinity of the sports field, as a police spokesman said. As a result, the players suffered at the age of 19 to 48 years of minor injuries. One Person was briefly knocked unconscious. A large number of paramedics came to the sports ground and brought the footballer as a precaution to the hospital.

In the Saarland, uprooted trees and brought some traffic to a Standstill. Streets were flooded, and many cellars were full of water. A car driver was injured in an accident in Beckingen easily, as a Branch on her car fell.

In Erfurt, fell in the stairs of the Cathedral festival, the Premiere of the first Musical version of Umberto Ecos “the Name of The Rose” play on the water: A strong rain front with thunder-Storm meant that the performance had to be terminated prematurely. The 2000 premiere of the visitors had seen almost half of the piece in front of the imposing backdrop of the mariendom.

According to the German weather service there may be thunderstorms on Saturday – for instance, in South East Bavaria, however, less strong than on Friday. Also in the area of the North sea coast it could be therefore uncomfortable.

ball was at least a helmet! Biker rides half-naked, with a grey mane on the Highway

Nothing occurs for arachnophobiker: spider catches and kills a bat

15-Year-old for days in the jungle disappeared, the police uses the voice of the mother

This Spot is under the skin: Smoking “quit – your pet’s sake!”

suspicion of serious sexual abuse of children: police are looking for Eric J.

From water and grain from the restricted zone: First Chernobyl vodka on the market

Brutal drug war: Naked bodies hanging as a warning to Knit from a bridge

a gift to the Bavarian state library

pictures of Ex Nude published and skull sent to: Stalker to five years of imprisonment

“mountain landscape” in the car: With these residents, it is not better to

study by the University of Exeter

do you Know the meaning of these German words that we use far too rarely?