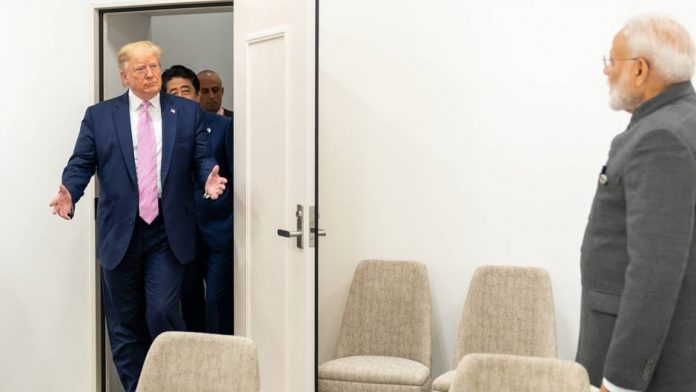 India has again rejected a mediation offer by US President Donald Trump in the Kashmir conflict with Pakistan. Foreign Secretary Subrahmanyam Jaishankar wrote on Twitter that he had informed his US counterpart, Mike Pompeo at a Meeting in Bangkok. “I said in clear words that any discussion on Kashmir, if at all justified, just with Pakistan, and that only bilaterally is to take place:” Trump had previously offered his help. “If I can, if you want to, I would give certainly,” he said. British India was divided in 1947, independent India and Pakistan. Since then, both countries vie for dominance over the Himalayan territory of Kashmir.

The United States are Chinese products worth about 300 billion dollars (270 billion euros) from September onwards, with a new Penalty tax of 10 percent supporting documents. The US President Donald Trump announced on Thursday via Twitter.

Our representatives have just returned from China where they had constructive talks having to do with a future Trade Deal. We thought we had a deal with China three months ago, but sadly, China decided to re-negotiate the deal prior to signing. More recently, China agreed to…

talks on Wednesday in China ended, The two countries – the largest economies of the earth economies – had the latest round of their trade without any visible progress. However, it was agreed that the negotiations at the beginning of September in Washington to continue.

The trade war between the two States has already been running for over a year. Trigger the anger of Trumps was originally about the fact that China exports far more to the USA than Vice versa. He calls for the elimination of market barriers, is critical of the violation of intellectual property rights, forced technology transfer in China make U.S. companies and government subsidies. Since then, Trump has already occupied half of the imports from China with a 25% special duties. China reacted with counter-tariffs.

30. July: Donald Trump: “I am the least racist Person in the world”

Donald Trump after his recent verbal attacks levied racism has rejected the allegations. “I am the least racist Person in the whole world,” he told journalists in the White house. “No President before me has done so much for African-Americans.” Unemployment among black American citizens is historically low. Trump had arranged with a series of Twitter messages for outrage. He berated the African-American representatives Elijah Cummings, he then insulted the black civil rights activist Al Sharpton. In mid-July, Trump had attacked four dark-skinned politicians of the Democrats. In January, Trump had called some African countries as “shit holes”. To said the racism allegations, he said: “I am not a racist. I am the least racist Person they have ever interviewed, I can tell you that.”

According to his condescending Comments about a predominantly Black inhabited constituency in Baltimore has Donald Trump insulting tirades against a black civil rights activist from the stack left. His new attacks were made against the Reverend Al Sharpton, whom Trump described on Twitter as a “cheater” and a “troublemaker”. “He hates White people and police officers.” Sharpton had previously stated that he was on the road in the Trump chided Baltimore. So he moved apparently to the Anger of the President. “Next, Pastor Al will show up to complain and to protest,” tweeted Trump. “Nothing is being done for the needy. Sad!” The Impugned responded to the short messages of the US President. “Trump says that I was a troublemaker and a fraud. If he really thought I would be a cheater, then he would pick me up in his government,” tweeted Sharpton sarcastic.

Baltimore, under the leadership of Elijah Cummings, has the worst Crime Statistics in the Nation. 25 years of all talk, no action! So tired of listening to the same old Bull…Next, Reverend Al will show up to complain & protest. Nothing will get done for the people in need. Sad!

The National intelligence Director of the United States, Dan Coats, from the office. US President, Donald Trump announced on Twitter that Coats the Item on 15. August will make. As the successor to Trump intends to nominate Republican Congressman John Ratcliffe. Coats, co-ordinates the work of the US intelligence services, had in a series of security-political assessments to detect differences Trump. This, among other things, North Korea, Iran and Russia concerned. The President had at the beginning of the year, the competence of its own intelligence services massively out of the question – especially in the case of the assessment of Iran. Under Trump has already been a whole series of changes at the top of ministries and key authorities. So left, for different reasons, the Minister of defense of Jim Mattis, trump’s chief of staff, John Kelly and foreign Minister, Rex Tillerson from their Offices.

Donald Trump has once again drawn racism accusations to yourself. On Twitter, he let go of several tirades against the African-American members of Elijah Cummings. He berated Cummings him as a “brutal tyrants,” and described the majority of Black inhabited constituency in Baltimore as a “disgusting, rats and rodents infested shit-hole”. The electoral district of the prominent critic of his government, Trump wrote that he was the “worst” and “most dangerous” place in the United States. “No man would want to live.” Trump was obviously the criticism of Democrats in its stricter asylum policy at the border to Mexico. Cummings had left out on the “great men and women of customs and border protection” and the situation on the southern border of the United States, while “to be Baltimore’s constituency would be far worse and more dangerous”.

For his Comments Trump again earned a storm of indignation. The Chairman of the house of representatives, Nancy Pelosi, calling his messages “racist”. Today’s Stadtoberhaupt, the African-American democratic politician Bernard Young, criticized trump’s rhetoric as a “painful and dangerous”. Cummings responded and replied on Twitter: “Mr. President, I return daily to my constituency home. Every Morning I Wake up and I go out and fight for my neighbors.” It was his “constitutional duty, the supervision of the government. But it is my moral duty to fight for my voters”.

Why is so much money sent to the Elijah Cummings district when it is considered to be the worst run and most dangerous anywhere in the United States. No human being would want to live there. Where is all this money going? How much is stolen? Investigate this corrupt measurement immediately!

Mr. President, I go home to my district daily. Each morning, I wake up, and I go and fight for my neighbors.

It is my constitutional duty to conduct oversight of the Executive Branch. But, it is my moral duty to fight for my constituents.

27. July: the Supreme US court allowed the Trump wall with the Pentagon to build money

US President Donald Trump has achieved the planned construction of a controversial wall on the border to Mexico with a point victory in court. The US Supreme court free on Friday evening (local time) the way that the government can draw for the construction on money of the Ministry of defence. Trump wrote on Twitter, the decision was a “great VICTORY for border security and the rule of law”.