In two boat accidents in the Mediterranean sea could have died up to 170 migrants. A misfortune, possibly with 117 Missing occurred on Friday off the coast of Libya. Another is to have called on the Spain Route 53 deaths.

The International organization for Migration (IOM) from a boat that was in front of Libya in distress and, according to three Survivors of a total of 120 people have been to reported. Among the Missing ten women and two children, one of which had only two months old, tweeted IOM spokesman Flavio Di Giacomo on Saturday. The Survivors had brought to the Italian Navy on the island of Lampedusa.

The Navy had stated that the boat threatened to round 50 nautical miles (almost 93 km) North-East of the Libyan capital of Tripoli to capsize, and that around 20 people were on Board.

According to IOM spokesman, it could have been much worse. “You have told us that on the Dinghy, has placed in Libya on Thursday night, 120 people were. After ten to eleven hours of travel the boat was starting to air, and it started to drop. The people have fallen into the sea and drowned,” said Di Giacomo, the news Agency Adnkronos. On Board, especially the West were, therefore, Africans and about 40 Sudanese.

It had already been a rescue boat of the Libyan coast guard on the way to the accident site, said the spokesman Ajub Kasim. On the way to the boat the coast guard had had a breakdown. According to estimates by the Marine speaker is still around 50 migrants missing.

Since the populist government in Italy, the ports of the country for migrants, largely, to come less and less migrants, mostly in Libya-drop. Italy and the EU support to the Libyan coast guard to bring the people back in the civil war. However, the haulers are avoided via other routes, especially in the direction of Spain.

On this Route there are now in the Alboran sea 53 Dead, such as the UN refugee Agency, UNHCR said, citing an aid organization. A Survivor’ve stated, after he was driven after 24 hours at sea and a fishing boat was rescued. The information on two ship accidents, however, could not be independently verified, UNHCR.

Europe argue for years about a more even distribution of refugees by Boat. A big part of traveling so far to Germany. 2017 registered in Germany according to Eurostat, 198.000 asylum seekers, representing 31 percent of all first-time applicants in the EU.

“Without a secure and legal channels for people seeking safety in Europe, ( … ), the Mediterranean is a graveyard,” tweeted the aid organization Doctors without borders. Since the beginning of the year were not included – the last of the accidents, according to the IOM in the Mediterranean sea 83 people were killed. In the prior-year period, there were 199.

“as Long as Europe’s ports remain open, as long as someone helps the tractor make of the tractor, unfortunately, more shops and kill more,” said Italy’s right-wing interior Minister, Matteo Salvini. In recent months, several rescue ships were blocked with migrants at sea for days. Including two ships of the German aid organisations Sea were last-Watch and Sea-to-Eye, only after a week-long tug-of-war were allowed to leave the migrants to Malta, where they should be on other countries.

Sea-Watch took now again elsewhere in the Mediterranean migrants. The Berlin-based NGO explained that they had rescued 47 people in distress at sea. The people of the boat were now safe and cared for. Where the “Sea-Watch 3”, however, is unclear. Salvini said immediately, to Italy, you are likely to. The next impasse. 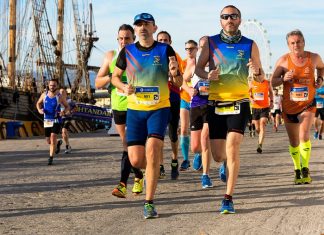