6 Reasons To Watch Chinese Drama The Song Of Glory The Song of Glory stars Li Qin and Qin Hao in the lead roles. “The Song of Glory,” tells the story of Shen Li Ge, who is an orphan. He is raised as an assassin and is forced to join hands with Prince Peng Cheng. He is given the responsibility to end to the reign of corrupted nobles. The drama has a dreamy love story and also has a strong female lead you can look forward to. The captivating plot of “The Song of Glory” is surely going to entertain you. The show has already hit over a billion views and it hasn’t even reached its midway point. Here are a few reasons why you should try watching The Song of Glory.

There are very few female leads like Shen Li Ge in dramas. The first episode showcases her many talents and the following episodes will surely make you fall in love with this strong female lead. Her refusal to let anybody step on her is her biggest charm. Li Ge’s frank and straightforward character makes her even more lovable.

The relationship between the couple in this drama is swoon-worthy and their sass, banter, makes them a power couple. The couple is similar to each other in many ways and has strong fighting prowess and brainpower. They are an absolute delight to watch and their interactions are fun and exciting.

Read more: The Massive Net Worth Of Bigg Boss 13 Contestant Sidharth Shukla Will Blow Your Mind 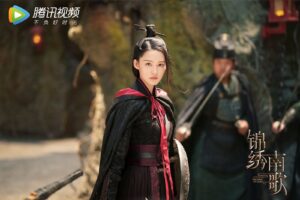 The family dynamics is something that will make you cry. Most of the characters in the show are lovable and you will get attached to them. The relationship between them will make you smile and laugh. There are several siblings in the drama, and their relationships are a treat to watch.  They are the pillars of the drama and look so much like a real-life family. They tease and support each other just like real siblings.

The “The Song of Glory” portrays the best female friendships and the girls give the best friendship goals. Really. We will not be able to elaborate because those will be major spoilers. We are just hoping that their friendship doesn’t get sour in the later episodes.

The costumes look a bit average at first glance, but if you pay more attention to them you will notice the delicate details of the outfits.  The outfits are special and will make them memorable for you. Meanwhile, the production team has worked hard in making the sets glamorous. The Song of Glory” has a distinctive decor and creates a real atmosphere.